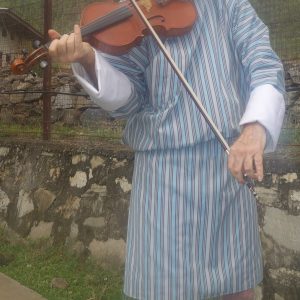 Educated as a scientist and graduated as a mathematician by the Massachusetts Institute of Technology, Harlan Yarbrough has earned his living as a full-time professional entertainer and musician most of his life, including a stint as a regular performer on the prestigious Grand Ole Opry in Nashville, Tennessee.  Harlan  has worked professionally as a jazz violinist and vocalist and has also worked professionally singing and playing Western Swing, bluegrass, celtic music, country music, and folk music on mandolin, fiddle, guitar, banjo, celtic harp, mouth harp, and dobro.  Harlan ’s repeated attempts to escape the entertainment industry have brought work as a librarian, physics and mathematics teacher, syndicated newspaper columnist, and city (land use) planner, among several other occupations.

Harlan lives, writes, and continues to improve his dzonkha vocabulary and pronunciation in Bhutan whenever possible.  He has an abiding affection for the valley of the Paro Chu above Satsam but visits North America, Australia, New Zealand, and sometimes Europe to perform and thereby to recharge his bank account.  Although Harlan settled in Bhutan, she lived, performed, and taught in the U.S., Australia, New Zealand, and Denmark in  previous decades and still thinks of both New Zealand and Far North Queensland as home.  Harlan has written five novels, three novellas (two published), three novelettes (two published), and fifty-some short stories, of which nearly forty have been published in seven countries.  His work has appeared in the Galway Review, Indiana Voice Journal, Red Fez, Veronica, Scarlet Leaf Review, Green Hills Literary Lantern.  His story “While The Iron Is Hot” won the 2019 Fair Australia Prize.